What are AIDs and HIV? 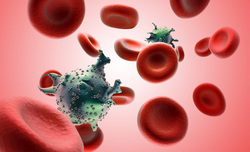 AIDs stands for Acquired Immune Deficiency Syndrome and is caused by HIV; Human Immunodeficiency Virus.
HIV is most commonly caught by sharing dirty needles, having unprotected sex and in some cases can be passed from Mother to Fetus. HIV attacks the immune system making it increasingly harder to fight off even mild virus'. AIDs develops from HIV - it's like HIV's final stage where the body is now unable to fight disease.
There is no known cure for HIV or AIDS but there are treatments which can enable people to live a healthy life.

AIDs and HIV in Africa

A graph to show the amount of people in the population of a country who have HIV. 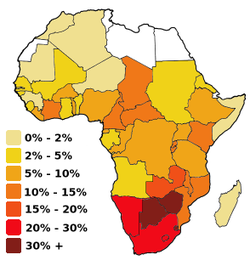 In Africa AIDs is a growing and substantial problem. Africa alone has 24.5million cases of HIV/AIDs while the entire rest of the world has 9.8million- that's near enough two and a half times the amount. South Africa is the most affected area as the graph shows at least 30% of the population are infected with either HIV or AIDs in some parts. It is also a known fact that 20% of adults in South Africa are infected; that's one in five people!
Despite the high percentage of people affected in South Africa there is only a 65% chance of dying from AIDS- even though that looks like a high statistic it's still lower than 85% chance in Botswana and 70% in Zimbabwe. 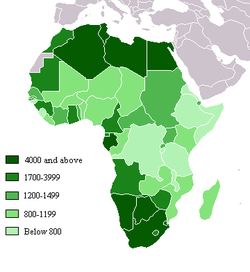 A graph to show the GNI per capita of Africa
This is because South Africa have a high GNI per capita(proved by the graph) meaning that they have the money to afford medicine and treatment for people with HIV and AIDs so that less people die from the disease.
Powered by